I woke this morning to the news that Osama bin Laden is dead: killed in a fire fight in Pakistan, when US troops stormed the mansion where he was holed up with his closest friends and one or two members of his family. The rhetoric from around the world, including our own Prime Minister, was of justice having been served on the man who was responsible for the deaths of thousands of people in New York almost a decade ago, and who has masterminded God-only-knows how many more Al Qaeda attrocities since. I confess I was quite relieved when I heard the news, maybe even glad he is dead. Though I have not lived in fear of bin Laden, nor been put off travelling for fear of bombs, I have (as I imagine most people have) bought into the natural unrest that accompanies national events like the Royal Wedding and the ongoing thoughts that something like 9/11 or 7/7 may happen again. More than that I have prayed for and tried to empathise with those who suffered loss because of bin Laden, and I have shared, only minutely, some of their anger with Al Qaeda and especially with God. So, it seems then that having taken out the figure-head, the Western allies might have at least deflated some of the enthusiasm and energy that drove Al Qaeda operations and in so doing perhaps contributed to the undermining of thier whole set-up. Perhaps...

Where I struggled though was with the rhetoric of justice. It is natural to talk about justice when some-one has committed crimes so hideous and disgusting, and so very public, that they simply demand a response from those in authority. It is those times when we want the God of justice, the God whom we Christians believe in, to come and exact revenge on our behalf. We desire the God whom the Psalmist knows will reap revenge on those who do evil:

1 Why do you boast of evil, you mighty hero?
Why do you boast all day long,
you who are a disgrace in the eyes of God?
2 You who practice deceit,
your tongue plots destruction;
it is like a sharpened razor.
3 You love evil rather than good,
falsehood rather than speaking the truth.
4 You love every harmful word,
you deceitful tongue!
5 Surely God will bring you down to everlasting ruin:
He will snatch you up and pluck you from your tent;
he will uproot you from the land of the living.

Psalm 52 has strong words for those who practice deceit and who plot destruction: surely an apt description for bin Laden and his cronies?! As such he deserves the everlasting ruin which God is said to bring. We want this God of justice for deserving sinners, who commit evil in their hearts, who seek to harm others. In bin Laden's case I am sure that his sins are many, and plentifully ugly, perhaps even that he deserved to be punished (I can't with any integrity say that he deserved to die since I am not sure this is the Christian way). My recurring thought today though has been that when this God of justice deals with me, I want Him to be some-one else other than the God who deals with bin Laden. I want this God to look on the evil in my heart, to look on the harm I have done to others, and to re-act differently. When this God of justice finds me out, I want Him to be the God of mercy. 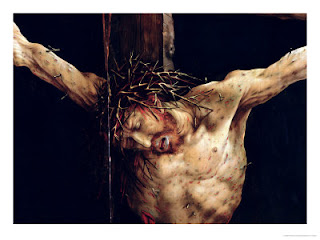 The truth I have come to appreciate today as I have pondered bin Laden's sins and my own (mere peccadilloes by comparrison)  is that the God we meet in Jesus Christ is both: He is the God of justice, who hates the sins of wicked people like bin Laden, and me, and he is the God of mercy who does not give me what I deserve but who offers graciously something wholly new. On the cross, Jesus Christ bore the weight of the world's sin, and with outstretched arms offered forgiveness and a new life for even the filthiest and most hideous of people. I don't know what this means for bin Laden. He is dead now. I don't know and can't imagine what it might mean for those touched by al Qaeda's evil. There are no easy answers. For me it speaks of the absolute strangeness of God's justice: "God made Jesus Christ, him who knew no sin, to become sin for us so that in him we might become the righteousness of God" (2 Cor. 5:21), and in so doing cautions me of the need to be slow to speak of justice in terms of revenge. God's justice as we encounter it in Jesus Christ is both painful and healing, deathly and life-giving, rejecting and embracing. That doesn't mean that Psalm 52 is wrong-headed in seeking God's justice. As Christian people we envisage a world different from the one we curently inhabit and this envisioning looks to God to set things aright. It does mean however that the way the prayer is answered is nothing like how the Psalmist hoped it would be. In self-giving and forgiveness, God razes my pride to the ground and puts to death my selfishness to make way for new life and hope in God. Equating justice with revenge and killing doesn't do this. As Erica Basnicki, whose father was killed in the towers on 9/11, put it today,


"People have used the word 'justice' quite a bit today, and I don't feel that way about it...My family, we're not a revenge family. Osama's death is not something that we're happy about. I can't really say we're unhappy about it, but that's not what we wanted. We will be happy and celebrating when terrorists are financially incapable of committing further acts of violence. We'll be happy when the war is over."

Amen. Come Lord Jesus. This is not an answer to the questions that the day has raised for me. I don't know what it means to speak of justice as something distinct from revenge in this context. Nor do I know what it means that God's justice looks so awkward and strange in a world hurting so much because of bin Laden's actions. As bin Laden encounters the living God, he meets one whose existence and way of being is complete antithesis of his own; as he does so I hope he mourns and weeps bitterly for the life he chose, and for the hell he has caused for others. I hope and pray also that the God he encounters is merciful to those whom his actions have destroyed, and as such that justice is done and healing can begin.