March 15, 2013
It's not at all intended as a snide remark when I emphasise the *and* in the post-title: not all theologians are good preachers, and anybody who has been to church regularly for any length of time can tell you that not all preachers are competent theologians. John Webster, Professor of Systematic Theology at Aberdeen University (formerly Lady Margaret Professor at Oxford), is genuinely both. So I'm really excited about the arrival of this book with the postman this morning: 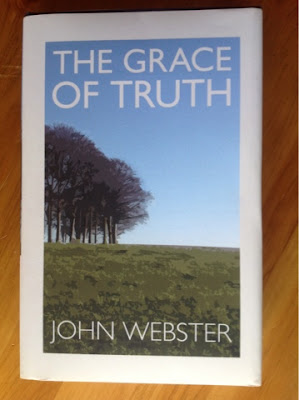 The Grace of Truth (Farmington Hills, Michigan: Oil Lamp Book, 2011) is a collection of 26 of Webster's sermons, mostly delivered when he was Canon of Christ Church, Oxford. Having only so far read the first couple I can't say too much with authority yet, but what I have seen is a rigorous attentiveness to the scriptural texts, and a keen eye for their application in human lives. There's also a great deal of creativity on display here too, which is as refreshing as it is intriguing: so, for example, the parable of the vineyard owner and the murder of his son in Matthew 21 is here understood as a critique of lying.

The preface is written by Webster himself, though most of the editorial work is done by two others: Daniel Bush and Brannon Ellis. In the preface, Webster outlines in brief why he thinks preaching is still integral to the life of the Church: because "the Gospel's God is eloquent, he does not remain locked in silence, but speaks." This speech is supremely encountered in the life, death, and resurrection of the Word made flesh - Jesus. It is to Him that the Church must look for its own life and direction. As such "the Church of the Word is a church in which, alongside praise, prayer, lament, sacraments, witness, service, fellowship, and much else, there takes place the work of preaching." Preaching draws our attention to scripture and to Christ in a very particular way.

It's all very Barthian, as we might expect from Webster, but it is good theology put into practice in service of God and God's people, and delivered in act of preaching. I'm looking forward to reading the rest!

9bg9oy7ubo said…
Instead we refer interested readers to the books listed under for an perception into this complicated facet of card counting. Card Counting methods are typically not impeded by the addition of quantity of} decks to the game. However many decks are used, the count begins at zero and would finish at zero if there were no cards left, so no adjustments 토토사이트 must be made to the counting course of. So the Card Counter appears for occasions when there are extra high cards left to be performed than an everyday deck would have. The table shows each potential beginning participant hand running down the left-hand aspect of the table and all potential supplier upcards running along the highest of the table. Cross referencing the 2 will inform you the right play to make.
28 January 2023 at 17:01