Truth and Unity with Karl Barth 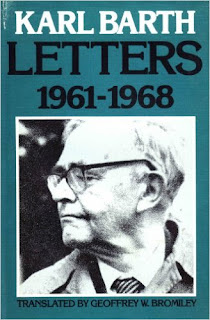 I am enjoying reading Barth’s letters from the final years of his life - Karl Barth: Letters 1961-1968 (Edinburgh: T&T Clark, 1981) - and came across another gem recently. This one concerns the heart of the ecumanical project, and in particular the possibility of closer ties between Reformed Protestantism and the Roman Catholic Church. In a written reply to The Institute of the Sacred Heart of Mary, Belgium, in 1962 Barth thanked the sisters there for their initial contact with him, and their feedback on his own theological work. He then comments on their corrspondence - they must have said something about the importance of loving one another - and he writes,

'You are right to tell me that much of the route to the unity of the church is laid when we come together again in love. Being the friend of many Roman Catholic theologians, I add that I am happy to affirm that in truth as well we have come closer on both sides than could ever have been imagined fifty years ago. One thing is certain: the more both your theology and ours concentrate on the person and work of Jesus Christ, true God and true man, our sovereign Lord and only Savior, the more we shall find ourselves already united in spite of some important differences. Do you not also think the day will one day come when we shall no longer speak of Roman Catholic and Protestant Christians but simply of Evangelical Christians forming one body and one people? Veni Creator Spiritus.'

What I find striking here is Barth’s willingness, in the face of so many other stark disagreements he had with the Roman Catholic Church, to give light to the possibility of unity in the truth. He does not advocate turning a blind eye to the truth, or overlooking differences in pursuit of some false unity. Instead, the answer to the disunity of the Church is a more intense focus on Jesus Christ. In His light we stand as equally reprobate and wrong, but equally loved. It is an important lesson, particularly in Churches such as the Church of England where the future unity has appeared to be compromised by the quesiton of truth in relation to sexuality and identity, to such an extent that the only way forward seems to be a split or a profound compromise. Barth advocated a better way: careful, deep, and sustained attention to Jesus. This means no shorthand statements ("Jesus is inclusive”) and no oversimplified rhetoric (“the bible clealry states…”), but a more thorough, prayerful, and humble reckoning with God in the mystery of the incarnation. This will always be challenging and surprising; it will be the only way to keep us together in an honest and truthfilled way, too.